Alan Moore (born 18 November 1953) is an English writer primarily known for his work in comic books, a medium where he has produced series including Watchmen, V for Vendetta, and From Hell. Frequently described as the best graphic novel writer in history, he has been called "one of the most important British writers of the last fifty years". He has occasionally used such pseudonyms as Curt Vile, Jill de Ray, and Translucia Baboon. Moore has also been referenced in popular culture, and has been recognized as an influence on a variety of literary and television figures including Neil Gaiman, Joss Whedon, and Damon Lindelof. 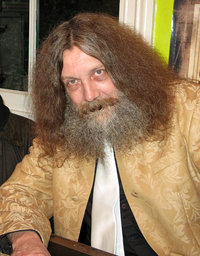 image credit
Alan Moore by Fimb, is licensed under cc-by-2.0, resized from the original.