Tommy Aldridge (born August 15, 1950) is an American heavy metal and hard rock drummer. Aldridge is noted for his work with numerous bands and artists since the 1970s, such as Black Oak Arkansas, Pat Travers Band, Ozzy Osbourne, Gary Moore, Whitesnake, Ted Nugent, Thin Lizzy, Vinnie Moore & Yngwie Malmsteen. Self-taught, Aldridge was initially inspired by the music of Cream, The Beatles, Jimi Hendrix and Led Zeppelin. Drummers such as Joe Morello, Ginger Baker and John Bonham were particularly influential as Aldridge developed his drumming style. Aldridge himself has become very influential, and is regarded as a double bass drum pioneer in rock music. 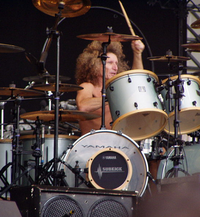