Shayna Baszler (born August 8, 1980) is an American mixed martial artist. She currently trains under former UFC Heavyweight Champion Josh Barnett. She has a record of 15 wins and 8 losses, with 14 wins coming by way of submission.Baszler gained recognition for her pseudo-chicken wing submission that she has used to defeat many female fighters, including Roxanne Modafferi. In an audio interview with Jordan Breen on the Sherdog Radio Network, she dubbed the submission, which she created in training, as the "Shwing." Baszler is the first MMA fighter to win via wrestling guillotine, also known as the twister in MMA or submission grappling.Under Billy Robinson, Baszler is the only certified female catch wrestler in the United States. Robinson has contributed immensely in training several mixed martial arts legends including Kazushi Sakuraba and Josh Barnett. 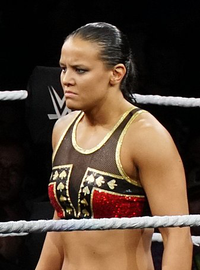