Santiago Segura Silva (born July 17, 1965 in Madrid) is an actor, screenwriter, director and producer of Spanish cinema, popular for its pentalogy film Torrente. He also worked to a lesser extent as a TV presenter, voice actor and comic writer, besides being original collector. At 12, he began making films with a Super-8 camera, and, after a recommendation from Fernando Trueba, began to be realized within 35 mm, with funding them had reaped rewards by participating in game shows. Fame would come with his first feature, "Torrente, el brazo tonto de la ley", to be followed by numerous sequels that would make it the highest grossing Spanish film series. Despite the benefits that this gave Segura film series (an estimated 41 million among the top three) the filmmaker crossed in 2010 a phase of economic problems due to the limited success of the projects it undertook, forcing him to produce a quarter of the series and sanitize his business as productor. However, the downturn was temporary and its holding company had in March 2011 a sum of 16 million euros in assets. 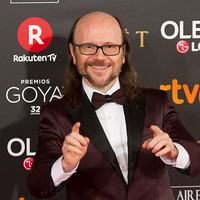 image credit
Santiago Segura by Carlos Delgado, is licensed under cc-by-sa-4.0, resized from the original.