(This name uses Spanish naming customs: the first or paternal family name is Ballesta and the second or maternal family name is Vialcho.) Salvador Ballesta Vialcho (born 22 May 1975), commonly known as Salva, is a Spanish former footballer who played as a striker, and a current manager. A goalscorer noted for his flair and workrate, he played for seven different top division clubs, most notably Atlético Madrid, Valencia – with whom he won his sole team trophy – and Málaga. Over the course of 11 La Liga seasons, he amassed totals of 235 games and 87 goals, adding 126/52 in Segunda División. Off the field, Salva was known for his nationalistic and militarist viewpoints. 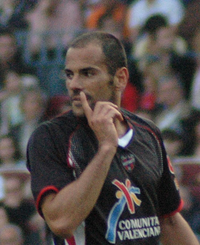 image credit
Salva Ballesta by Darz Mol, is licensed under cc-by-sa-2.5, resized from the original.