Page Samuel McConnell (born May 17, 1963 in Philadelphia, Pennsylvania) is an American multi-instrumentalist most noted for his work as a songwriter and keyboardist with the American rock band Phish. He plays on stage right which is referred to by fans as "Page Side, Rage Side."In addition to being a member of Phish since 1985, McConnell has had several other musical liaisons during his career, including a trio named Vida Blue. He released his first solo album, featuring original compositions, in 2007. 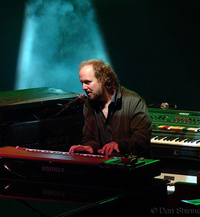 image credit
Page McConnell by Dan Shinneman, is licensed under cc-by-sa-2.0, resized from the original.