Nathan Donald Diaz (born April 16, 1985), professionally known as Nate Diaz, is an American mixed martial artist currently competing for the UFC in the lightweight division and won The Ultimate Fighter 5. As of March 10, 2014, he is #6 in official UFC lightweight rankings and ranked the #8 lightweight in the world by Sherdog. He is the younger brother of retired mixed martial artist Nick Diaz. In addition to the UFC, Diaz has competed in the WEC, Strikeforce, and Pancrase in Japan. 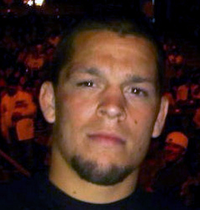 image credit
Nate Diaz by Streetice00, is licensed under cc-by-sa-3.0, resized from the original.