Michael "Mike" Henry (born November 7, 1965) is an American actor, producer, screenwriter, singer, and comedian. He is best known for his work on Family Guy, where he is a writer, producer, and voice actor. He provides the voices for many characters including Cleveland Brown, Herbert, Bruce, and Consuela. Starting with the show's fifth season, Henry had received billing as a main cast member. In 2009, Henry, Richard Appel, and Seth MacFarlane created a spin-off of Family Guy called The Cleveland Show to focus on Cleveland and his new family. 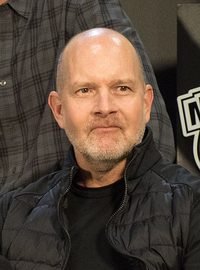 image credit
Mike Henry (voice actor) by Rhododendrites, is licensed under cc-by-sa-4.0, resized from the original.