Lindsay Vere Duncan, CBE (born 7 November 1950) is a Scottish stage, television and film actress. On stage she has won two Olivier Awards, a Tony Award for her performance in Private Lives, and another Tony Award nomination for her role in Les Liaisons dangereuses. Duncan has starred in several plays by Harold Pinter. Her most famous roles on television include: Barbara Douglas in Alan Bleasdale's G.B.H. (1991), Servilia of the Junii in the HBO/BBC/RAI series Rome (2005–2007), and Adelaide Brooke in the Doctor Who special "The Waters of Mars" (2009). On film she voiced the android TC-14 in Star Wars Episode I: The Phantom Menace (1999), and she played Alice's mother in Tim Burton's Alice in Wonderland (2010). She was appointed CBE (Commander of the British Empire) in 2009 for services to drama. 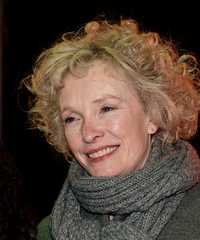 image credit
Lindsay Duncan by Marie-Lan Nguyen, is licensed under cc-by-3.0, resized from the original.