Tyler-Justin Anthony Sharpe (born August 26, 2002), known professionally as Lil Tecca, is an American rapper, singer, songwriter, and record producer. He rose to mainstream fame with the release of his single "Ransom", which peaked at number four on the Billboard Hot 100. The single was included on his debut mixtape We Love You Tecca (2019) which peaked at number 4 on the US Billboard 200. The mixtape also included the singles "Love Me" and "Did It Again". His debut studio album, Virgo World (2020) debuted at number 10 on the Billboard 200 and included the Billboard Hot 100-charting songs "Dolly" and "When You Down". 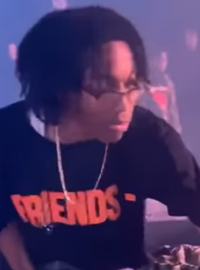 image credit
Lil Tecca by LOU WOP, is licensed under cc-by-3.0, resized from the original.