Lewis "Lew" Wallace (April 10, 1827 – February 15, 1905) was an American lawyer, Union general in the American Civil War, governor of the New Mexico Territory, politician, diplomat, and author from Indiana. Among his novels and biographies, Wallace is best known for his historical adventure story, Ben-Hur: A Tale of the Christ (1880), a bestselling novel that has been called "the most influential Christian book of the nineteenth century." Wallace's military career included service in the Mexican–American War and the American Civil War. He was appointed Indiana's adjutant general and commanded the 11th Indiana Infantry Regiment. Wallace, who attained the rank of major general, participated in the Battle of Fort Donelson, the Battle of Shiloh, and the Battle of Monocacy. He also served on the military commission for the trials of the Lincoln assassination conspirators, and presided over the trial of Henry Wirz, the Confederate commandant of the Andersonville prison camp. Wallace resigned from the U.S. Army in November 1865 and briefly served as a major general in the Mexican army, before returning to the United States. Wallace was appointed governor of the New Mexico Territory (1878–81) and served as U.S. minister to the Ottoman Empire (1881–85). Wallace retired to his home in Crawfordsville, Indiana, where he continued to write until his death in 1905. 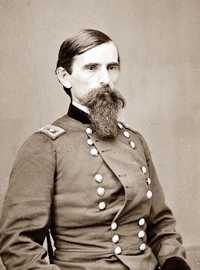