Kris Holden-Ried (born Kristen Holden-Ried, August 1, 1973) is a Canadian actor. In 2007, he portrayed William Compton in the first seven episodes of the Showtime series The Tudors. In 2010, in the television series Lost Girl, his character is a Fae wolf-shifter, employed in the human world as a cop. 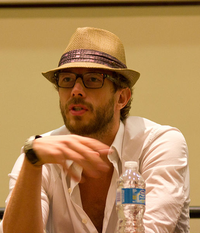 image credit
Kris Holden-Ried by Tabercil, is licensed under cc-by-sa-3.0, resized from the original.