Juliette Binoche (French pronunciation: ​[ʒyljɛt binɔʃ]; born 9 March 1964) is a French actress, artist and dancer. She has appeared in more than 40 feature films, been recipient of numerous international accolades, is a published author and has appeared on stage across the world. Coming from an artistic background, she began taking acting lessons during adolescence. Often referred to as "La Binoche" by the press, her other notable performances include: Mauvais Sang (1986), Les Amants du Pont-Neuf (1991), Damage (1992), The Horseman on the Roof (1995), Code Unknown (2000), Caché (2005), Breaking and Entering (2006), Flight of the Red Balloon (2007) and Camille Claudel 1915 (2013). 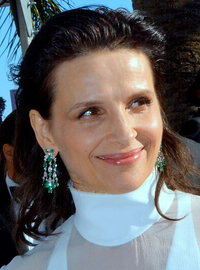 image credit
Juliette Binoche by Georges Biard, is licensed under cc-by-sa-3.0, resized from the original.