Joseph William "Joe" Namath (/ˈneɪmɨθ/; born May 31, 1943), nicknamed "Broadway Joe" or "Joe Willie",is a former American football quarterback. He played college football for the University of Alabama under coach Paul "Bear" Bryant and his assistant, Howard Schnellenberger, from 1962–1964, and professional football in the American Football League (AFL) and National Football League (NFL) during the 1960s and 1970s. Namath was an American Football League icon and played for that league's New York Jets for most of his professional football career, and finished his career with the NFL's Los Angeles Rams. He is known for once boldly guaranteeing a Jets' victory over Don Shula's NFL Baltimore Colts in Super Bowl III (1969) and then making good on his prediction with a 16-7 win for the Jets. 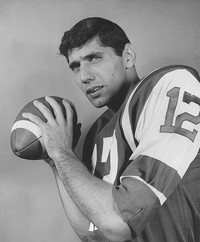