James William Reiher (born May 18, 1943), better known by the ring name Jimmy "Superfly" Snuka, is a semi-retired Fijian professional wrestler and actor. He is signed with WWE, working in their Legends program. Originally from the Fiji Islands, Snuka wrestled for several promotions in the 1970s and 1980s. Snuka was the first ECW Heavyweight Champion and held the title on two occasions. He is best known for his time in the World Wrestling Federation (WWF) in the early to mid-1980s and is credited with introducing the high-flyer style of wrestling to the WWF. His children, former WWE Superstar Jimmy Reiher, Jr. and current WWE Diva Sarona Reiher, are also wrestlers. 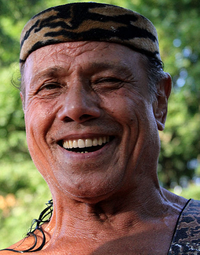 image credit
Jimmy Snuka by Paparazzo Presents, is licensed under cc-by-sa-3.0, resized from the original.