Jeon So-yeon (Korean: 전소연; born August 26, 1998), known mononymously as Soyeon, is a South Korean rapper, singer, songwriter, and record producer signed to Cube Entertainment. She first gained attention for competing in the television shows Produce 101 and Unpretty Rapstar before debuting as a solo artist on November 5, 2017. On May 2, 2018, she debuted as the leader and main rapper of the girl group (G)I-dle for whom she has written and produced most title songs. She is also part of SM Station X girl group project Station Young, and has portrayed League of Legends character Akali in the virtual musical groups K/DA and True Damage. 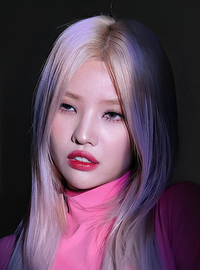 image credit
Jeon So-yeon by Marie Claire Korea, is licensed under cc-by-3.0, resized from the original.