Hakim Ziyech (Arabic: حكيم زياش; born 19 March 1993) is a professional footballer who plays as an attacking midfielder or winger for Premier League club Chelsea and the Morocco national team. He is nicknamed "The Wizard", a title given to him by Ajax supporters. Ziyech started his professional career at Dutch club Heerenveen in 2012 and signed for fellow Dutch club Twente two years later. In 2016 he signed for Ajax on a five-year deal, with a reported transfer fee of €11m. The 2018–19 season was the most prolific season in Ziyech's career, as he scored 16 goals and provided 13 assists in the Eredivisie. He joined Premier League club Chelsea in the 2020–21 season. Originally eligible to play for the Netherlands or Morocco at international level, he represented Morocco at the 2018 FIFA World Cup and the 2019 Africa Cup of Nations. Ziyech is known for his finishing, dribbling, long passes, technique, and ability from free kicks. In 2019, he was selected as one of the 20 best players in the UEFA Champions League for the 2018–19 season. At the end of the same year, he was ranked 29th in The Guardian's list of "The 100 best footballers in the world". 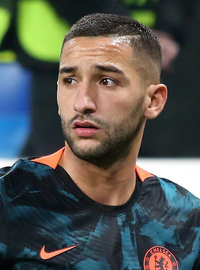 image credit
Hakim Ziyech by Кирилл Венедиктов, is licensed under cc-by-sa-3.0, resized from the original.