Gonzalo Gerardo Higuaín (Spanish pronunciation: [ɡonˈsalo iɣwaˈjin], born 10 December 1987) is an Argentine professional footballer who plays as a striker for Napoli and the Argentinian national football team. Gonzalo Higuaín is a much more orthodox number nine in both league and national team.Nicknamed El Pipita or Pipa, as was his father, Higuaín was born in France, attaining Argentine citizenship in 2007, and now holding dual nationality. Able to play as a striker, Higuaín "is known for his speed in the last third of the pitch and his great striking ability." 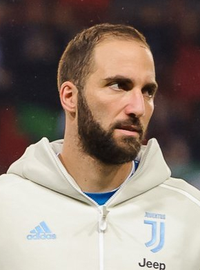 image credit
Gonzalo Higuan by , is licensed under cc-by-sa-3.0, resized from the original.