Farhan Akhtar (born 9 January 1974) is an Indian film director, screenwriter, producer, actor, playback singer, lyricist and television host. Born in Mumbai to screenwriters Javed Akhtar and Honey Irani, he grew up under the influence of the film industry. After completing his schooling in Maneckji Cooper school, he pursued a commerce degree in HR College, Mumbai, before dropping out, and beginning his career in films by working as an assistant director in Lamhe (1991) and Himalay Putra (1997). He achieved further success by portraying Milkha Singh in the 2013 film Bhaag Milkha Bhaag, earning him the Filmfare Award for Best Actor. 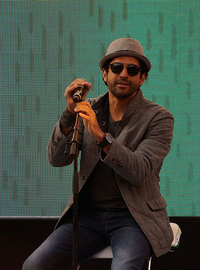 image credit
Farhan Akhtar by Satdeep Gill, is licensed under cc-by-sa-4.0, resized from the original.