Eric James McCormack (born April 18, 1963) is a Canadian/American actor, musician, writer and producer. Born in Toronto, he began his acting career performing in school plays at Stephen Leacock Collegiate Institute High School. He left Ryerson University in 1985 to accept a position with the Stratford Shakespeare Festival, where he spent five years performing in numerous play productions. Daniel Pierce, a neuroscientist, in the TNT crime drama Perception, and provides the voice of "Lucky" on The Hub's Pound Puppies series. 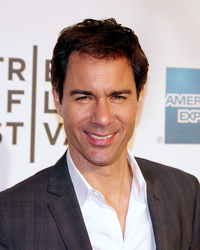 image credit
Eric McCormack by David Shankbone, is licensed under cc-by-3.0, resized from the original.