Edgar Howard Wright (born 18 April 1974) is an English film and television director, screenwriter, producer, and actor. He is most known for his "Three Flavours Cornetto trilogy" consisting of Shaun of the Dead, Hot Fuzz, and The World's End, in collaboration with friends and recurrent collaborators Simon Pegg, Nira Park and Nick Frost. He also collaborated with them as the director of the television series Spaced.He also co-wrote, produced and directed the 2010 film Scott Pilgrim vs. the World. Along with his friend Joe Cornish and Steven Moffat, he co-wrote Steven Spielberg's The Adventures of Tintin. Wright and Cornish co-wrote the screenplay of upcoming superhero film Ant-Man, which Wright will direct for a planned release in July 2015. 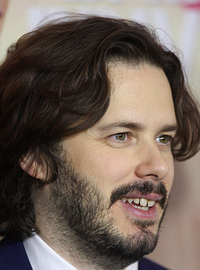 image credit
Edgar Wright by Eva Rinaldi, is licensed under cc-by-sa-2.0, resized from the original.