Dana Andrews (January 1, 1909 – December 17, 1992) was an American film actor. He was one of Hollywood's major stars of the 1940s, and continued acting, though generally in less prestigious roles, into the 1980s. One of his best-known roles, and the one for which he received the most praise, was as war veteran Fred Derry in The Best Years of Our Lives (1946). 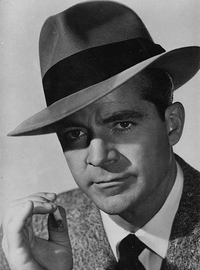 image credit
Dana Andrews by DanaAndrewsPics, is licensed under cc-by-sa-3.0, resized from the original.