Cottari Kanakaiya Nayudu (About this sound pronunciation (31 October 1895 – 14 November 1967), also known as 'CK', was the first captain of the Indian cricket team in Test matches. He played first-class cricket regularly till 1958, and returned for one last time in 1963 at the age of 68. In 1923, the ruler of Holkar invited him to Indore and made him a Captain (land and air) in his army, conferring on him the honour of a Colonel in Holkar's Army.Arthur Gilligan led the first MCC tour to India in the 1926-27 season. For the Hindus at Bombay Gymkhana, Nayudu hit 153 in 116 minutes with 11 sixes. One of the sixes, off Bob Wyatt, landed on the roof of the Gymkhana. The MCC presented him with a silver bat in recognition of that innings. He was also the first Indian cricketer to endorse a brand (Bathgate Liver Tonic) in 1941. 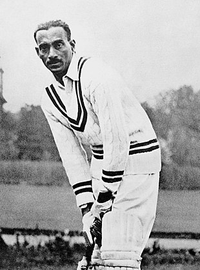