(For the American record producer, see Billy Bush (record producer). For the American actor, see Billy "Green" Bush.) William Hall "Billy" Bush (born October 13, 1971) is a former American radio and television host, and is a member of the Bush family that includes two former U.S. presidents and other nationally known political figures spanning several generations. After first appearing as a correspondent on Access Hollywood from 2001 to 2004, Bush became a primary anchor of the program in 2004. Bush also hosted The Billy Bush Show, a nationally syndicated talk and music radio show that aired from 2008 to 2014. He departed Access Hollywood in 2016, having been named a co-host of the third hour of Today. In October 2016, he became the subject of controversy when a 2005 recording surfaced of Donald Trump having a lewd conversation with Bush, in which Trump boasted about sexually assaulting women. Following the incident, Bush was suspended and eventually fired from Today. 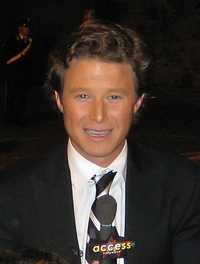 image credit
Billy Bush by Daniel S.-L., is licensed under cc-by-sa-4.0, resized from the original.