Annabeth Gish (born March 13, 1971) is an American actress. She has played roles in films Shag, Hiding Out, Mystic Pizza, The Last Supper and Double Jeopardy. On television, she played Special Agent Monica Reyes on The X-Files, Elizabeth Bartlet Westin on The West Wing and as Eileen Caffee on the Showtime drama Brotherhood.She currently stars on the FX drama The Bridge. 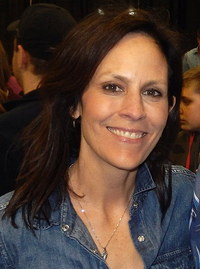 image credit
Annabeth Gish by Greg2600, is licensed under cc-by-sa-2.0, resized from the original.