Sir Andrew Lloyd Webber, Baron Lloyd-Webber (born 22 March 1948), properly styled and widely known as The Lord Lloyd-Webber, is a British composer and impresario of musical theatre.Several of his musicals have run for more than a decade both in the West End and on Broadway. He has composed 13 musicals, a song cycle, a set of variations, two film scores, and a Latin Requiem Mass. Lloyd Webber is also the president of the Arts Educational Schools London, a prestigious performing arts school located in Chiswick, West London. 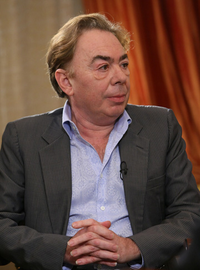 image credit
Andrew Lloyd Webber by premier.gov.ru, is licensed under cc-by-3.0, resized from the original.