Allari Naresh (Original: Edara Naresh) is an Indian film actor who stars in Tollywood films. He is the son of Telugu veteran director and producer EVV Satyanarayana. Born and brought up in Chennai, Tamil Nadu, he moved to Hyderabad after completing his schooling at Sri M. Venkatasubbha Rao Matriculation Higher Secondary School at T. Nagar, Chennai. He is fluent in Telugu, Tamil, Hindi and English. He got the tag "Allari" before his name after the success of his first film in Tollywood. His debut film in Tamil, Kurumbu, was a remake of Allari. He received Nandi Award for Best Supporting Actor and Filmfare Best Supporting Actor Award (Telugu) in 2008 for his performance as "Gali Seenu" in the movie Gamyam. 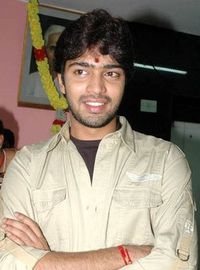 image credit
Allari Naresh by Durgapradeep, is licensed under cc-by-sa-3.0, resized from the original.