Aaron Charles Rodgers (born December 2, 1983) is an American football quarterback for the Green Bay Packers of the National Football League (NFL). Rodgers played college football for the University of California, Berkeley, where he set several career passing records, including lowest single-season and career interception rates. He was selected in the first round (24th overall) of the 2005 NFL Draft by the Packers.After backing up Brett Favre for the first three years of his NFL career, Rodgers became the Green Bay Packers' starting quarterback in 2008 and led them to a victory in Super Bowl XLV after the 2010 NFL season; Rodgers was named Super Bowl MVP. He was named Associated Press Athlete of the Year in 2011, as well as being voted league MVP for the 2011 and 2014 NFL seasons. Rodgers has led the NFL three times in touchdown-to-interception ratio (2011, 2012, 2014), twice in passer rating (2011, 2012), touchdown passing percentage (2011, 2012) and lowest passing interception percentage (2009, 2014), and once in yards per attempt (2011).Rodgers is the NFL's all-time career leader in passer rating during the regular season with a rating of 106.0 and third all-time in the postseason with a rating of 101.0 (among passers with at least 1,500 and 150 pass attempts, respectively). He currently is the only quarterback to have a career passer rating of over 100.0 in the regular season as well as having the best touchdown-to-interception ratio in NFL history at 3.96 touchdowns per interception. He also holds the league's lowest career passing interception percentage for quarterbacks during the regular season at 1.6 percent and the single-season passer rating record of 122.5. 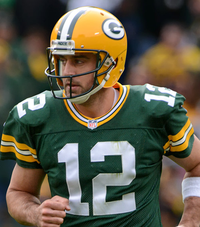 image credit
Aaron Rodgers by Mike Morbeck, is licensed under cc-by-sa-2.0, resized from the original.