Anthony Dominick "Tony" Benedetto (born August 3, 1926), known as Tony Bennett, is an American singer of popular music, standards, show tunes, and jazz. Bennett is also an accomplished painter, having created works—under the name Anthony Benedetto—that are on permanent public display in several institutions. He is the founder of the Frank Sinatra School of the Arts in New York City. He has sold over 50 million records worldwide. 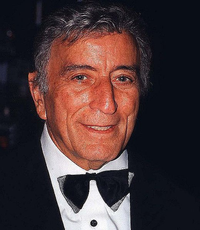 image credit
Tony Bennett by John Mathew Smith &, is licensed under cc-by-sa-2.0, resized from the original.