Walter Stacy Keach, Jr. (born June 2, 1941) is an American actor and narrator. He is mostly known for his dramatic roles; however, he has done narration work in educational programming on PBS and the Discovery Channel, as well as some comedy (particularly his role in the Fox sitcom Titus as Ken, the hard-drinking, chain-smoking, womanizing father of comedian Christopher Titus and for Sergeant Stedenko in Up in Smoke) and musical roles. He is also known for portraying fictional detective Mike Hammer in a recurring series of television movies and series. 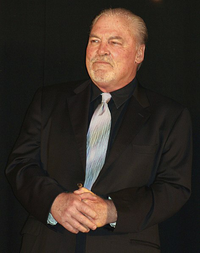 image credit
Stacy Keach by https://www.flickr.com/photos/shine_like_stars/, is licensed under cc-by-sa-3.0, resized from the original.