Robert John Davi (born June 26, 1953) is an American actor, singer, writer, and director. Over the course of his acting career, Davi has performed in more than 130 films. He has played such roles as Vietnam veteran and Special Agent Johnson in Die Hard, the opera-singing heavy Jake Fratelli in The Goonies, Hans Zarba in Son of the Pink Panther and Al Torres in Showgirls. 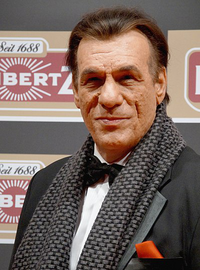 image credit
Robert Davi by 9EkieraM1, is licensed under cc-by-sa-3.0, resized from the original.