Rivers Cuomo (/ˈkwoʊmoʊ/; born June 13, 1970) is an American musician, singer and songwriter who is best known as the lead vocalist, lead guitarist and principal songwriter of the alternative rock band Weezer. Raised in an ashram in Connecticut, Cuomo moved to Los Angeles at age 19, where he participated in a number of rock bands before founding Weezer in 1992. With Weezer, he has released nine studio albums.In addition to fronting Weezer, Cuomo has also worked as a solo artist. In December 2007, he released Alone: The Home Recordings of Rivers Cuomo, which featured home demos that Cuomo recorded from 1992 to 2007. He released another album, Alone II: The Home Recordings of Rivers Cuomo, in November 2008. Alone III: The Pinkerton Years was released in December 2011. 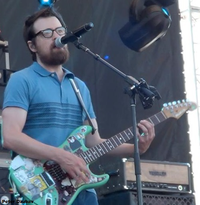 image credit
Rivers Cuomo by Peter Dzubay, is licensed under cc-by-sa-3.0, resized from the original.