Prakash Raj (born Prakash Rai on 26 March 1965) is an Indian film actor, director, producer and television presenter, who mainly works in the South Indian film industry. He used to act in back-to-back stage shows for 300 a month in the initial stages of his career when he joined Kalakshetra, Bengaluru and he has 2,000 street theater performances to his credit.After working in the Kannada television industry and Kannada cinema for a few years, he made his debut in Tamil cinema through Duet (1994) by K. Prakash was also the host of Neengalum Vellalam Oru Kodi during the shows second season. 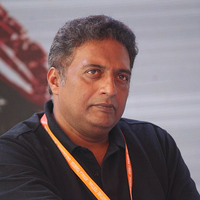 image credit
Prakash Raj by Sreejithkoiloth, is licensed under cc-by-sa-4.0, resized from the original.