Michael Cudlitz (born December 29, 1964) is an American actor, best known for his role in the TNT drama Southland, starring as John Cooper, in the HBO miniseries Band of Brothers as Sergeant Denver "Bull" Randleman, and in the AMC drama Walking Dead, as Sergeant Abraham Ford and also Micky Tippin in Blode. 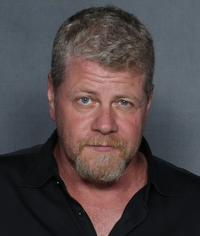 image credit
Michael Cudlitz by Supercon Conventions, is licensed under cc-by-2.0, resized from the original.