Fredrick Marty Jannetty (born February 3, 1960) is an American professional wrestler, best known for his time in the World Wrestling Federation as part of tag team The Rockers with partner Shawn Michaels, and later as a singles competitor. While in the WWF, he became a one time Intercontinental Champion and a one time Tag Team Champion with the 1-2-3 Kid, and headlined Survivor Series 1989. With Michaels, The Rockers became two time World Tag Team Champions in the American Wrestling Association. 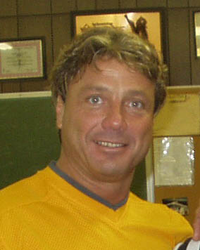