Marcos Aoás Corrêa (born 14 May 1994), known as Marquinhos, is a Brazilian professional footballer who plays as a defender for Ligue 1 club Paris Saint-Germain, which he captains, and the Brazil national team. Mainly a centre-back, he can also play as a right-back or a defensive midfielder. He began his career at Corinthians, and after winning the 2012 Copa Libertadores he moved to Roma for an eventual fee of €3 million. Marquinhos was a regular in his only season as Roma reached the Coppa Italia Final. In July 2013, he moved to Paris Saint-Germain for €31.4 million on a five-year contract, one of the highest fees for a player under the age of 20. He has won 25 trophies at the club, including seven Ligue 1 titles. Marquinhos played less frequently after the acquisition of compatriot David Luiz in 2014, returning to an integral role after the latter was sold in 2016. Marquinhos made his full international debut for Brazil in 2013, and was part of their under-21 side which won the 2014 Toulon Tournament. He also represented the nation at the 2015 Copa América and the following year's Copa América Centenario, and won a gold medal at the 2016 Olympics. He subsequently took part at the 2018 FIFA World Cup, the 2019 Copa América and the 2021 Copa América, winning the 2019 title. 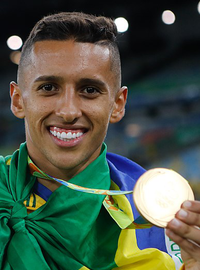 image credit
Marquinhos by Fernando Frazão/Agência Brasil, is licensed under cc-by-3.0, resized from the original.