Lois Smith (born November 3, 1930) is an American actress. She has played supporting roles in films including East of Eden, Five Easy Pieces, Resurrection, Fatal Attraction, Fried Green Tomatoes, Dead Man Walking, Tumbleweeds, Twister, and Please Give. In television she has performed in series that include The Americans, True Blood, and Desperate Housewives. Smith is also known for her extensive work in the theatre, receiving two Tony Award nominations for originating the role of Ma Joad in The Grapes of Wrath (1990) and for the role of Halie in a revival of Buried Child in 1996. She also starred in an acclaimed Off-Broadway revival of The Trip to Bountiful in 2005 for which she received an Obie Award for Best Actress, an Outer Critics Circle Award, a Lucille Lortel Award, and a Drama Desk Award. Smith is an ensemble member of Steppenwolf Theatre Company in Chicago. She was inducted into the American Theatre Hall of Fame in 2007 for her outstanding contributions to the theatre. In 2013 she was given a Lifetime Achievement Obie Award for excellence in Off-Broadway performance. In her career she has also taught, directed, and written for the stage. 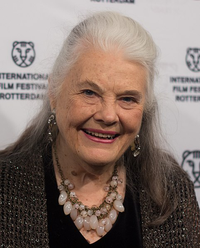 image credit
Lois Smith by Vera de Kok, is licensed under cc-by-sa-4.0, resized from the original.