Lindsey Caroline Vonn (née Kildow; born October 18, 1984) is an American World Cup alpine ski racer on the United States Ski Team. She has won four World Cup championships—one of two female skiers to do so, along with Annemarie Moser-Pröll—with three consecutive titles in 2008, 2009 and 2010, plus another in 2012. Vonn won the gold medal in downhill at the 2010 Winter Olympics, the first ever in the event for an American woman. Vonn was a correspondent for NBC News covering the 2014 Winter Olympics in Sochi, Russia. 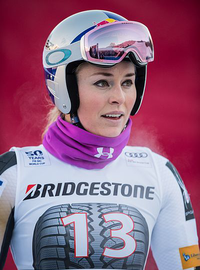 image credit
Lindsey Vonn by 2eight, is licensed under cc-by-sa-3.0, resized from the original.