Clarence Leroy "Lee" Van Cleef, Jr. (January 9, 1925 – December 16, 1989), was an American film actor who appeared mostly in Westerns and action pictures. His sharp features and piercing eyes led to his being cast as a villain in scores of films, such as Kansas City Confidential, High Noon, The Man Who Shot Liberty Valance, and The Good, the Bad and the Ugly. After his success in the last of these, he played the hero in many of his later movies. 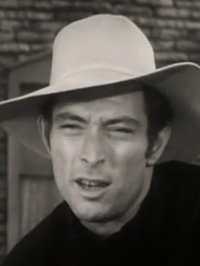