Kevin L. Barnes (born May 30, 1974) is the singer, multi-instrumentalist, and songwriter for the indie rock group of Montreal, part of the Elephant 6 Collective. Barnes started the band on his own and, although providing several stories as to the origin of the name, is said to have named it after a failed romance with a woman from Montreal. The group has recorded twelve full-length albums, and numerous EPs and 7" singles. His brother, David Barnes, is an artist and has designed most of the band's artwork for albums after the release of The Gay Parade.In 2003, Barnes married Nina Aimee Grøttland, a former Ethnobabes member, as well as a graphic artist. They have one daughter, Alabee, born in Oslo on December 29, 2004. 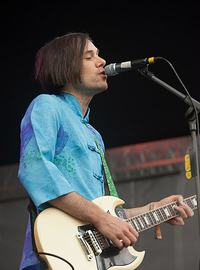 image credit
Kevin Barnes by Anna Hanks, is licensed under cc-by-2.0, resized from the original.