Jewel Kilcher (born May 23, 1974), professionally known as Jewel, is an American singer-songwriter, guitarist, producer, actress, and poet. She has received four Grammy Award nominations and has sold over 27 million albums worldwide.Jewel's debut album, Pieces of You, released on February 28, 1995, became one of the best-selling debut albums of all time, going 15 times platinum. On July 2, 2013, NBC announced that Jewel would be a judge on the fourth season of the a cappella competition The Sing-Off. 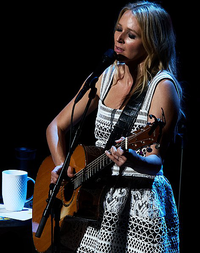 image credit
Jewel (singer) by Justin Higuchi, is licensed under cc-by-2.0, resized from the original.