Jason Andrew Molina (December 30, 1973 – March 16, 2013) was an American musician and singer-songwriter, originally from Lorain, Ohio. He came to prominence performing and recording as Songs: Ohia, both in solo projects and with a rotating cast of musicians. Since 2003, he had recorded either under his own name or with a stable line-up of band members as the Magnolia Electric Co. 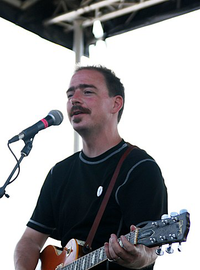 image credit
Jason Molina by Amanda Hatfield, is licensed under cc-by-2.0, resized from the original.