Jade Louise Ewen (born 24 January 1988) is an English singer, songwriter, actress and former member of the Sugababes. Ewen began her singing career in a girl group named Trinity Stone signed to Sony BMG in 2005, but they disbanded in 2007 with no album released. In 2009, she represented the UK at the 2009 Eurovision Song Contest performing the Andrew Lloyd Webber penned "It's My Time" after winning the UK national selection. She achieved fifth place, making her the most successful British Eurovision act since 2002.Ewen replaced Keisha Buchanan of the Sugababes in September 2009 and has since attained two UK top-ten singles with the group and one album Sweet 7. In September 2013 Ewen confirmed the band had split. 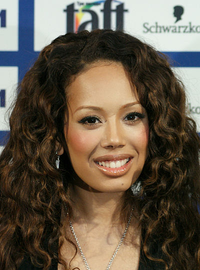 image credit
Jade Ewen by Daniel Kruczynski, is licensed under cc-by-sa-2.0, resized from the original.