Hansika Motwani (born 9 August 1991) is an Indian actress who predominantly appears in Tamil and Telugu films. She made her film debut as a leading actress in the Telugu film Desamuduru (2007), winning the Filmfare Award for Best Female Debut – South. She then appeared in several high-budget Telugu films, including Kantri (2008) and Maska (2009). She started her career in Tamil cinema with Mappillai (2011) and then appeared in several commercially successful Tamil films including Velayudham (2011), Oru Kal Oru Kannadi (2012), Theeya Velai Seiyyanum Kumaru (2013) and Singam II (2013) establishing herself as one of the leading contemporary actresses of Tamil cinema. 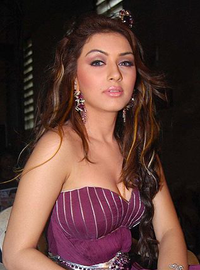 image credit
Hansika Motwani by IndiaFM/Bollywoodhungama.com, is licensed under cc-by-3.0, resized from the original.