Franz Anton Beckenbauer (German pronunciation: [fʁant͡s ˈbɛkənˌbaʊ̯ɐ]; born 11 September 1945) is a German football coach, manager, and former player, nicknamed Der Kaiser ("The Emperor") because of his elegant style; his leadership; his first name "Franz" (reminiscent of the Austrian emperors), and his dominance on the football pitch. He is generally regarded as the greatest German footballer of all time and one of the greatest and most decorated footballers in the history of the game. Beckenbauer was a versatile player, who started out as a midfielder, but made his name as a defender. He currently works as a pundit for Sky Germany and is a columnist for mass tabloid Bild. 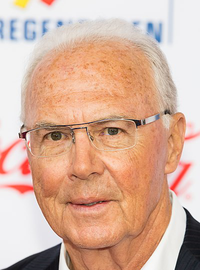 image credit
Franz Beckenbauer by Sven Mandel, is licensed under cc-by-sa-4.0, resized from the original.