Ernest "Ernie" Banks (January 31, 1931 – January 23, 2015), nicknamed "Mr. Cub" and "Mr. Sunshine", was an American professional baseball player. He was a Major League Baseball (MLB) shortstop and first baseman for 19 seasons, 1953 through 1971. He spent his entire MLB career with the Chicago Cubs. He was a National League (NL) All-Star for 11 seasons, playing in 14 All-Star Games. Banks is regarded by some as one of the greatest players of all time. 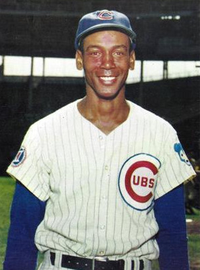