Eduardo Luiz Saverin (Portuguese pronunciation: [eduˈaɾdu luˈis ˈsaveɾĩ]) is a Brazilian internet entrepreneur and investor. Saverin is one of five co-founders of Facebook, along with Mark Zuckerberg, Dustin Moskovitz, Chris Hughes, and Andrew McCollum. As of 2012, he owns less than 5% of Facebook's shares and has a net worth of $3.9 billion, according to Forbes. He has also invested in early-stage startups such as Qwiki and Jumio. 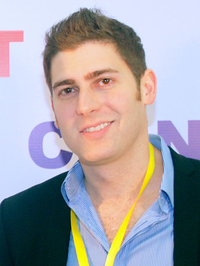 image credit
Eduardo Saverin by Gravesv38, is licensed under cc-by-sa-3.0, resized from the original.