Donald Hugh "Don" Henley (born July 22, 1947) is an American singer, songwriter and drummer, best known as a founding member of the Eagles before launching a successful solo career. Henley was the drummer and co-lead vocalist for the Eagles from 1971–1980, when the band broke up, and from 1994-present, when they reunited. Henley sings lead vocals on Eagles hits such as "Witchy Woman", "Desperado", "Best of My Love", "One of These Nights", "Hotel California", "Life in the Fast Lane", and "The Long Run". Since 1994, he has divided his musical activities between the Eagles and his solo career. 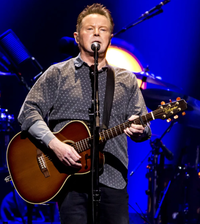 image credit
Don Henley by Derek Russell, is licensed under cc-by-sa-2.0, resized from the original.