Dennis Edwards (born February 3, 1943) is an American soul and R&B singer, notably a lead singer in The Temptations, on Motown Records. Edwards joined the Temptations in 1968, replacing David Ruffin and sang with the group from 1968 to 1976, 1980 to 1984 and 1987 to 1989. In the mid-1980s, he attempted a solo career, scoring a hit in 1984 with "Don't Look Any Further" (featuring Siedah Garrett). Today he is the lead singer of The Temptations Review featuring Dennis Edwards, a Temptations splinter group. 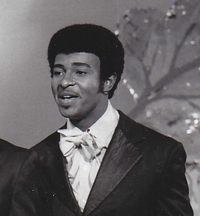