Darryl Wade Worley (born October 31, 1964) is an American country music artist. Signed to DreamWorks Records Nashville in 2000, Worley released four albums for the label: Hard Rain Don't Last (2000), I Miss My Friend (2002), Have You Forgotten? (2003), and Darryl Worley in 2004. After the label closed in 2005, he moved to 903 Music, an independent label owned by Neal McCoy, releasing Here and Now in 2006, shortly before that label's closure. His most recent studio release is 2009's Sounds Like Life via Stroudavarious Records, owned by James Stroud. Worley's six albums have produced 18 singles on the Billboard Hot Country Songs charts, including three Number Ones: "I Miss My Friend", "Have You Forgotten?", and "Awful, Beautiful Life", from 2002, 2003 and 2004–2005, respectively. "Have You Forgotten?" spent seven weeks at Number One. Nine other singles have reached the Top 40. 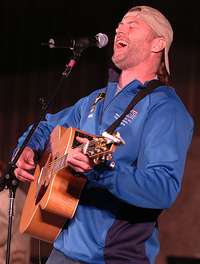